My first blog in a while - Mummy multitasking to another level.

So I havent actually written on here for a very long time.
For a long while I have been totally taken over with everything that has been going on and with pregnancy and mummy brain I could barely think of the name of the road I live on let along sit down and write anything...
Finally I feel like my head is a bit together well today I feel like that anyway.. lol.
There is so much that is going on in my life now having 2 girlies under 2 I really want to document and share my journey and thoughts.
Every Sunday I am going to share what has been going on in my week and end with A MUMMY IS ... ? I'll share what I have learnt that week, what it is to be a mum. I feel that being a mummy or parent is a total learning curve and we learn something new each day and we keep on learning with each child.

Monday
Mondays are my cleaning day while Scarlett is at nursery, I have a little obsession with cleaning.  Hubby always jokes that I'm my happiest when cleaning, he is right :-).  There is nothing best than having a clean house it really invigorates me and I feel like I can take on the world when everything is clean and tidy.  The moment Scarlett is home its chaos again which I really dont mind I would rather her enjoy herself than it being all nice a tidy but those few hours of tidyness is nice its like when you put your makeup on, your ready for the day.

Tuesday
We have swimming in the morning and since having Eva my mum has gone in the pool with Scarlett.  It melts my heart the closeness that my mum and Scarlett have sometimes it brings a tear to my eye as you can see how much they love each other.  I am dying to get back in the pool with her as she is progressing so much , I feel like I am missing out just watching from the side.  I feel like you know whatey has heeled now (downstairs) So when our new term starts in 2 weeks I will be going in with her.

Wednesday
We had a terrible night with Scarlett she is normally so good with sleeping but she just wasnt having any of it tuesday night so wednesday we were knackered.  The plan was to go to a local stay n play but it just wasnt happening as I was still in my dressing gown at 9:15am I hadn't had a coffee and it started at 10am.
Scarlett was coming down with a cold and by the afternoon the tazamanian devil had set in.  I had a moment where I just wanted to lock myself in the cupboard with a large glass of Gin and tonic an cry but a big I mean massive deep breathe and I calmly put her on the naughty step for the first time.  It went well and she knew what she had done wrong.  I dnt think hubby would have appreciated the Tv being smashed by a toddler play kitchen bowl.  Does the insurance over this?

Thursday
Another nursery day and more tidying and food shop.  I actually really enjoy food shopping, something you definatley cant do with children unless you want them to combusted with snacks you have given to keep them occupied and quiet.

Friday
Is the day we meet up with a friend and her daughter who is the same age as Scarlett.  As they have got older our conversations have got shorter from the interuption of either chasing a child or making sure they are behaving themselfs in the soft play area.
Mothehood really went to the next level today! We went to a gymnastics soft play for the first time, Scarlett had her coat, hat and almost one shoe off before I could even pay.  She had handed her coat to another mum someone completly random taking her little boy to the toilet that was close to the coats.  If you can imagen a dog being let off the lead at the most amazing park running around getting into everything, this was Scarlett.  I dont know if it's her age or just her personalitiy but this child is hyper! She literally wanted everything that someone else had, going up to the children taking it off them, climbing on them.  One little girl was looking at a photo on her Nan's phone that she just took of her and she sat down next to them also looking at the phone. She has no self awareness at all.
As I am coming to grips with having a toddler and a newborn I have been juggling being out and about with them.  Scarlett loves being out so im always doing stuff with her and diddnt want this to change.  When I woke up on Friday morning I never thought I would be running around a gymnastics play centre breastfeeding my 8 week old baby practically hanging off my boob and chasing a toddler boucing around like she has had extra durecell batteries in.  It really was like a scene from a comedy sketch.  God knows what the other parents thought of me.lol.  This is multitasking to another level!!!
We finished off in costa and Scarlett had her first Babycinno, most of it was down her and on the table but she enjoyed it. 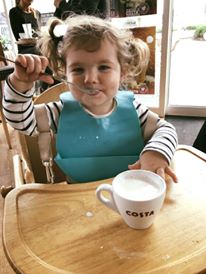 Saturday
We had a nice late lunch at Bill's then went to the park to feed the ducks.  I have a little phobia of pigeons and when we started to feed the ducks it turned into my worst nightmare there was so many pigeons they were everywhere one even pecked my leg to get some bread they are horrible.  I hate them.
Eva was 2 months old otday I can't believe how quick it is going its just crazy.  She is smiling loads and starting to look less like a newborn and have more character, she is such a good baby. 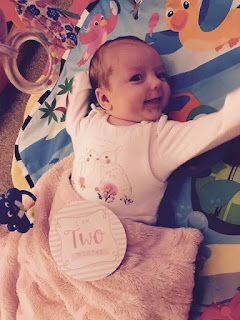 Sunday
A bit of a lazy day, I had a nice coffee in bed. Hubby did some painting with Scarlett, she loves painting and wants to do it everyday.  I manage to contain the paint to the plastic sheet, the paper and Scarlett's hands but when Hubby manages the actitivity it gets everywhere I think he just lets her loose with her picasso materpieces.

This week I have learnt that a mummy is a super multitasker, no matter what is thrown at us we just get on with it the best we can.
Posted by littlemisshomelife at 23:58